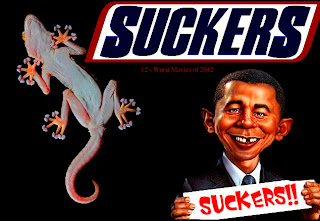 12.Jab Tak Hai Jaan - Its not hard to believe why a ShahRukh Khan movie is there in this list , leave alone the last movie of Yash Chopra. The story is such a sucker that you might want to put your head inside a live Bomb container. The leading ladies esp Kaif is such a plastic face that someone might want to go environment friendly. "Save Earth , Dont use Plastics"
SRK with beards Goshhhhh so ugly and untidy.

Even Gulzar and AR Rahman's deadly combo failed this time to save the movie. Badly written screenplays and badly directed movie, it barely beats Barfi! and Houseful2 to enter this list.

11.Bol Bachchan- Even you use the superstar's surname, and copy the Original Golmal, it will not save you from doomsday, even you use both the bachchans . Rohit shetty has an art of making Rs100Crores, he made that too.

But he doesnot have an art of film making. Ajay Devgn 's four movies in the list along with Abhishek's two movies, you will now not think twice about its credibility. The gay Bachchan topped with Krushna (such a piss) was such a sham on all the Bollywood fraternity.
EK DUM घटिया DIALOGUES FROM BOL BACHCHAN बोल बच्चन

Aata Maajhi Satakli — Now my head gear has gone to the sides .


10.Kismat Love Paisa Dilli or KLPD is a bad remake of same director. Why Bad, because he used Mallika Sherawat and Vivek Oberoi instead of Abhay Deol in previous version of Ek chalis ki last local.

The movie is so high on male chauvinism and sexist remarks that you might want to kick Sanjay Khanduri's balls. Ashutosh Rana and his team were another set of jokers. It was indeed a KLPD for the producers. In short :-
KLPD = (Ek chalis ki last local)-(Abhay Deol)-(Story)+(The nonsense script)/ Same director

9.Players - Why would you watch a bad desi version of Italian job topped by industries biggest duds like Abhishek Bachhan, Bobby Deol and Sikander Kher. The movie was further ruined by long legs of insipid female cast of Sonam Kapoor and Bipasha Basu. I guess the starring was enough to make it the biggest dud. But you never know .

Abbas-Mastan the white Siamese twin like directors were definitely the ones who never played a game. Dont forget Omi doing the same skit of 3 idiots.

8.Son of Sardar - You need to watch this movie to learn one thing, just passing humor on Sardar will not make a great movie. Ajay Devgan again using slapstick comedy genre to please the audiences but we have heard all the jokes in our childhood.

Sanjay Dutt should retire now badly, he is no more suited to do comic roles. The initials is clear enough for someone to understand - S.O.S

7.Teri Meri Kahaani - He hehe eehe Kunal Kohli at his best. A bad history lesson by baddest actress Priyanka Chopra. She should fire her wardrobe consultant if she has any, same kind of dress irrespective of movie.

Then we have body double of  King Khan in cheap costume. A bad Korean rip-off. Thrice upon a bad luck.Whoever went to Teri Meri Kahani is a gullible person and definitely a Naive cine-goer.Teri Meri Kahaani is a COPY of Movie Three Times. Kunal Kohli has always been a CHOR as his creations are copy lifted. Be it Mujhse Dosti Karoge (The Truth About Cats and Dogs), Hum Tum (When Harry Met Sally), Fanaa (Eye of the Needle) or Thoda Pyaar Thoda Magic (Mary Poppins, Nanny McPhee).


6.Ekk Deewana Tha - Javed Akhtar with such a bad screenplay and AR Rahman with such a novice music could not help the born to be dead movie.

Prateik Babbar is so bad actor that his linage looks doubtful. The director from Kerala making a movie in Hindi and sticking to his older original is another failed idea. He will test your threshold by showing ugly faces of Babbar and Miss Jackson. arrggghhhh.

5.Tezz - Priyadarshan is recently flanked by making bad copy of all good movies like Unstoppable. The story was so loose that a train could pass through its tunnel. Zayed Khan was more of a jumping jack while Anil kapoor hasnot come out of his slumdog days.

Ajay Devgan err Devgn needs a better director be it comedy or action thriller. Tezz was none of them. Even Priyadarshan's lucky mascot Mohanlal lost its pace with this slow (all you know) movie.

4.Khiladi786- Himesh Reshamiya and Akshay Kumar along with Asin is not a good combination. The Khiladi movies are known for thrillers however this one is a bad humor gone real bad.

Akshay Kumar is so high on wacky humor and over the top entertainers that he makes a joker out of himself. Did you get the joke?

3.Dangerous Ishhq- Vikram Bhatt can win an academy for the worst movies every year, and this one is the cherry. The so called comeback of Karishma Kapoor with bad model looking heroes who simply cannnot deliver an act. On top of it we have Bhatt's formula of Punarjanm and reincarnation and other ghostly elements.

A terrible film and the worst in Kapoor's filmi career. What a comeback.

2.Joker (2012 film) -It should have been the Number#1, but we still have the best left. Joker is Shirish Kunder or Kunder is Joker is a tough question. This movie is not the worst of all bollywood releases put together , but bigger than that. And you have a dancing alien and ensemble cast of Tees Maar Khan. 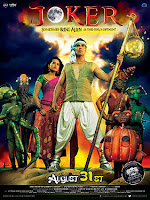 Akki could do nothing better than showing his dental stacks while being a scientist from Nasa. Can you digest ? I know we all puked inside the movie hall.
"Don’t fly my jokes.."

1. Aiyaa- When Anurag Kashyap is the producer you expect a bizarre  quirky movie but with the art in it. Well, he failed this time. Right from the name of the movie to the lead protagonist - Rani , it was her kind of comeback , where she did a sleazy smell sucking bitchy role.

The movie was so high of shit (read smelly) that you will close your nose and might dive to the nearest gutter for better airs. Save yourself.

Man , making something isnt easy . abusing someone is . So I am taking an opportunity to make a list as you did . But but but wait a min my list will have only one list . The greatest abuser of the year .. and that goest to you ... note down four tasks in your new year resolution ... 1. You won't abuse any creator (because creating something in the country like us isn't really easy if you think it is .. go and make 10 mins of short film) post it here and then I'll say you really know the business and then you will be at the level who can give the opinion .
2. watch Vinnaithaandi Varuvaayaa
3. watch ye maya chevase
4. do some introspection about what to do in the life.

Sorry Hidden Man. Making and liking are two different things and can be done independently. Write a blog and post it here before commenting on my blog.
Writing a blog takes invaluable time and creativity. Do it first then your piece of useless comment might be readable.